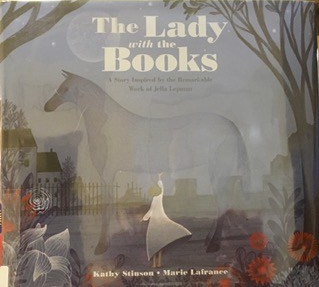 On this weekend following Thanksgiving, my thoughts are full of the many relationships, joys, memories I’m grateful for.

In this spirit I’d like to share a story about a woman, Jella Lepman, who cherished and shared the gift of books. She is someone to whom the world can be grateful for. The picture book The Lady with the Books-A Story Inspired by the Remarkable Work of Jella Lepman, written by Kathy Stinson, illustrated by Marie Lafrance, and published by Kids Can Press, tells her tale.

Jella Lepman fled Germany in 1939 to escape the oppression of Hitler’s Nazi Government. In 1945 she returned to Germany. Her job upon returning was to help the children of Germany return to their lives which had been so disrupted by war.

Jella believed books were as important to the childrens’ development as food, and so she created and found housing for an exhibition of books for children. She wrote letters to twenty countries to explain her idea and ask for donations. Nineteen of the countries responded immediately. Belgium, being twice invaded by Germany, was reluctant. Still, Jella didn’t give up. She wrote asking them to reconsider, explaining that books from around the world could help children feel connected to each other and that they were the best hope for preventing another war. To that, Belgium responded generously.

In 1946 Jella’s exhibition traveled. It reached four cities across Germany: Munich, Sttutgart, Frankfurt and Berlin. At the exhibitions Jella saw how much the children who visited wanted to take a book home. She decided to translate one book, that had been previously banned under Hitler, into German and have 30,000 copies printed. That book was The Story of Ferdinand, by Munro Leaf and illustrated by Robert Lawson. Every child at the Berlin exhibit took home a copy.

Later, Eleanor Roosevelt encouraged Americans to become involved and to donate to Jella’s efforts. Through those donations the International Youth Library was established. In 1949 it opened in a small mansion in Munich, and in 1983 it was moved to Munich’s Blutenberg Castle.

The “Book Castle” now holds the largest international collection of children books in the world. Jella’s inspiration was also instrumental in the development of IBBY (International Board on Books for Young People).

IBBY continues to be active in helping children, especially those whose lives have been disrupted by war, civil disorder and natural disasters, believe in the possibility of a better future. A portion of the proceeds of the sale of The Lady with the Books goes to IBBY’s Children’s Crisis Fund.

I'm a teacher for the visually impaired and blind, and a children's book author. Most often I can be found either with my nose in a book, a pen in my hand, or laptop before me, depending on the stage of my work in progress. View all posts by Jan Milusich